The Road from Vision to Reality

The Road from Vision to Reality

Everyone at some point in their life has had an idea for a great business. However, most of those ideas never come to fruition because the road from vision to reality is not easy. Here’s myself and Jason’s road from a vision in late February to narrowly making it to the first Arm Drop event on May 20th, 2017.

Jason and I both have full-time employment at the cement plant in Picton as Central Control Operators. During our Winter maintenance outage, we were talking about cars as we normally would when the idea struck about a mobile dyno. You could tell instantly that this wasn’t some random thought that had no merit…this was brilliant! We instantly began searching to see if this was possible and if anyone else was doing it in the area. We quickly found that it was possible and that there was even a couple in Ontario already. The great thing for us was that these units were hundreds of kilometers away and we felt the market could support one in our area.

In early March, after weeks of researching, we decided that this was something that we wanted to do. First thing was registering a business name, so Dynomite Mobile Dyno was born! Now that we knew who we were, it was time to figure out what we needed to run the business and how much it was going to cost. After researching various dyno units, we decided on DynoJet who seemed to have the best track record for accurate results and good customer support. We then needed to find a custom fabricator to build us a trailer around the dyno unit. We turned to L.B. Welding in Brighton for the job. They had never built a dyno trailer before, but the guy seemed to know exactly what we needed, so we decided to give him a chance.

Picking out everything we needed was the easy part. Convincing the bank to give us money proved to be the most difficult task! By the time we made it to the financing stage it was late March. We knew we wanted to be ready for the May 20th Arm Drop Drag Racing event, so things had to start progressing quickly. It didn’t!! It was very difficult to convince the bank to give us money for something they knew nothing about (at least that’s my thought on why). Like any well thought out financing proposal, we had a very detailed business plan consisting of everything we needed, events we were already booked to go to, income projections, competition analysis, etc, but things still seemed to be dragging on at a snails pace. We did finally get approval for funding, but 3 precious weeks had gone by and we were dangerously close to not having enough time to be ready for the Arm Drops.

We’re now in mid April when we were finally able to place an order with DynoJet for our dyno. The units are not assembled until an order is placed, so another week went by while the dyno was being put together. In the meantime, we provided L.B. Welding with the unit measurements, and they got started on the frame for the trailer. 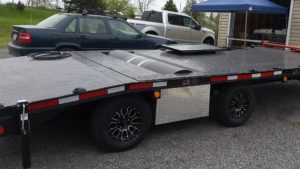 The last week of April the dyno was ready and began it’s journey from Las Vegas to Brighton. We had 4 weeks until the Arm Drops, so we figured that was lots of time. However, as fate would have it, there was an issue with brokerage at Customs, so the 5000lb package spent almost a week at the border, which put us dangerously close to missing our deadline. Once the brokerage was taken care of and the unit finally made it to Brighton, the guys worked tirelessly and finished the trailer with two days to spare before the Arm Drops.  We were so impressed with what they accomplished and would highly recommend them to anyone looking for a custom trailer.

Of course now that the trailer was done, we had a whole new set of problems to address…..we still needed to learn how to operate it!!  Over the next two days we dedicated our lives to learning the ins and outs of the unit. We ran every car and truck we had on it to get a variety of hookup scenarios and graphing options. We did run into issues of course, but DynoJet’s support team was there to walk us through solutions.

Finally May 20th came around, and although we were pretty nervous the response was fantastic. We had a great time, met a bunch of new enthusiasts, and were successful in getting the Dynomite Mobile Dyno name out there. So there it is. A business journey from February to May that started simply from a vision. What set us apart from the majority is that we had the drive and guts to see that vision through.